Alive
Dandy (ダンディ Dandi) is the titular main human protagonist of Space Dandy. He is a carefree alien hunter and captain of his own personal spaceship, the Aloha Oe. His life mission is to visit all the intergalactic locations of a breastaurant known as BooBies and indulge in his posterior fetish.

Dandy is a tall man with a somewhat lanky yet athletic build (in the episode We're All Fools, So Let's All Dance, Baby, he was shown to be muscular underneath his shirt and jacket). He has jet-black hair, messy sideburns, brown eyes, black eyebrows, a slender nose, an angular face, and an X-shaped mark on his chin. His hair is styled into a Regent pompadour, which is his most striking feature as well as his pride and joy.

Dandy sports a red shirt under a grey-blue and white sukajan jacket with navy blue dress pants, a black belt with a triangular golden buckle, and a gold communicator bracelet on his left wrist. Around his neck is a talisman that reads 成田山 . He also has large brown boots with metal soles. His jacket has a large gold star on his upper back and a smaller one on the left side of his chest.

When hunting aliens, Dandy wears a white full body suit, with blue rings around the shoulders and a blue line down the middle of the torso. This suit also has white gloves, and white boots.

Dandy is usually seen standing with a slouch with his hands in his pockets.

Dandy (or "Space Dandy" as he sometimes calls himself) is the anti-hero protagonist of the series and has a matching personality to go along with his looks; a delinquent and a dimwitted alien-hunting amateur. Dandy is not above shoving menial tasks to QT like cooking and cleaning up his Aloha Oe and grumbling how useless Meow is, and often neglects their thoughts and opinions.

Dandy is also shown to be a callous man and does not hesitate to sacrifice his crew for his own life, like abandoning Meow to the Deathgerian. Despite his boorish attitude and lax exterior, Dandy has a big heart, ready to help any female in need, though occasionally he does help males, within his interests. Examples include assisting Adélie in searching for her remaining relatives and helping Dr. H in locating Code D. He also comforts Ukuleleman as he is about to die, even though he was his enemy.

Over the course of the series, Dandy's relationship with Meow is vitriolic. Dandy is frequently annoyed by Meow's freeloading behavior, and only keeps the Betelgeusian around for his "knowledge" of unregistered aliens. In the second episode "A Search for the Phantom Spaced over Meow's failure to taste the fabled "Phantom Ramen" out of revenge. Dandy also subjects Meow to harmful situations and blames him whenever something goes wrong. In one episode, he abandoned Meow to be devoured by a monstrous alien, and only came back for him because Meow was holding their nearly expired Boobies point card.

However, Dandy does care for Meow in his own way. When Meow and QT were kidnapped and turned into statues by the Ukeleleman, he rushed to save them.

QT is Dandy's constant robot companion, serving as his pilot, engineer, and (unwilling) sidekick. Although Dandy sometimes mistreats QT, usually either by ignoring his opinions and advice or poking fun at the fact that QT is an old robot with an obsolete model, it is not to the same extent of his treatment of Meow. Despite the fact that QT is self-aware, which in episode "Even a Vacuum Cleaner Can Love, Baby" typically results in a robot being treated as faulty and discarded, Dandy never abandons QT and often treats him like he usually would with a regular human (or alien). In fact, he actually treats QT significantly better than most people, who would've thrown QT away in an instant.

Dandy knows Scarlet as he frequently brings captured aliens thought to be unregistered over to the Alien Registration Center. Due to Dandy's womanizing tendencies, he often flirts with her, though in every instance he never goes farther beyond that. Every time he is at the ARC, Dandy often tries to curry a reward out of her with his finds, only for them to be rejected due to the captured aliens being already registered.

In the second episode "A Search for the Phantom Space Ramen, Baby", Dandy flirted with Scarlet in an attempt to make her give him money to pay their restaurant bills. When they were both attacked by Gogol Empire soldiers sent by Dr. Gel, Dandy (as well as his crew) was awed by Scarlet's martial art skills, and comments when she leaves afterwards that she had a nice-looking posterior.

Dandy meets Honey in the first episode "live with the flow, baby" as a waitress at "BooBies" Honey appears in many episodes serving them food, drinks and sometimes information on unknown aliens.

Dolph is a side character only seen in "lovers are trendy, baby" as Scarlets obssesive ex, in this episode Scarlet employs Dandy to serve as a fake boyfriend for a week holiday. Near the end after stalking them for the whole week, he lands his robotic suit, fights with Dandy, after which Scarlet and Dandy run followed by Dandy kissing Scarlet in front of Dolph to proove to the psychopathic ex that Scarlet has moved on.

While a poor combatant and an inaccurate marksman (even when confronted with multiple targets at close range), Dandy is quick on his feet and is shown to improvise, which benefited the Aloha Oe crew more than once. When piloting either the mecha pod Little Aloha or the Aloha Oe's mecha form Hawaii Yankee, Dandy is revealed to be a good pilot as well as a decent shot. When piloting, Dandy could take out aliens larger than his mecha and even won a race by date.

Dandy is also shown be a pro surfer, shown in his escape from the Undian and Vestian's planet by navigating through the debris easily. However, he is said to have retired because no waves could "stir his heart."

Dandy is also more perceptive of things than he lets on; he knows the secret to warping, which is that warping is actually the movement of one's consciousness betweeen universes and doesn't really exist. It is hinted that he might not be human at all; in the Season 2 episode "Dandy's Day in Court, Baby", a simple DNA scan revealed that Dandy's body has no DNA whatsoever - instead, his body is made of Pyonium, an extremely rare and godlike particle.

It is possibly due to his biological nature that Dandy is the only one who possesses the extremely rare ability to traverse between multiple dimensions and still retain his identity. Dandy's power over space and time are heavily implied to be the reason why he (and possibly the rest of his crew) seemingly died in the explosion from "Live with the Flow, Baby", only to be found alive and well in the next episode. It is also implied that he also has awareness of his alternate selves as well as the dimensions they live in.

Because of these powers, Dandy is coveted by the Gogol Empire, who plan to use him as a tool to gain control over all existing universes, and constantly targeted by the persistent Dr. Gel. However, it is also possible that Dandy's memories are wiped every time he travels to a different dimension, and thus is unable to remember his previous adventures, which also explains his poor memory. Yet despite this, he seems to know that he cannot die.

The final episode reveals that Dandy was chosen to be the God of a new universe by the Narrator, but he turns down the job after learning that he would have to forfeit his body, which would make trips to BooBies boring and leave him unable to personally indulge in his posterior fetish. 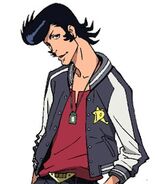 Dandy featured in the last episode. 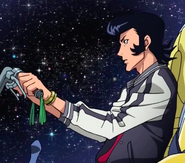 Dandy featured in 'A World With No Sadness, Baby'

'A World with No Sadness, Baby'