Edit
"...an alien which has topped the list of Aliens I Don't Want To Be Eaten By for 12 Straight Years."
— Bea, Episode 3 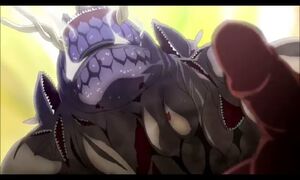 A Deathgerian (デスゲリア星人 Desugeria-seijin) is a large and powerful alien. It devours every living organism it comes across. Mamitas is currently the only known Deathgerian.

Deathgerians are huge tailed aliens mainly comprising of breasts with smaller mouths on their shoulders and neck. They have tendril-like features on their face, a giant mouth, purple head, red hands and a long purple tongue.

Deathgerians, when not in their feeding form, will take on the appearance of a helpless girl.