Dr. Gel (ゲル博士 Geru-hakase) is a high-ranking member of the Gogol Empire, who is tasked to capture Dandy for Admiral Perry for an as-yet unknown reason. He is the primary villain of Dandy's story, and is assisted by his right-hand partner Bea.

Dr. Gel appears to be a giant bearded gorilla with a G-shaped eye patch and periwig. He has a red cape covering his left arm. He carries a golden staff which seems to show his high rank in the Gogol Empire, similar to nobility.

In "I Can't Be the Only One, Baby", Dr. Gel is said to be a Gorillean, however that was an alternate universe version, so it's unknown if that is the name of Gel's race.

He seems to be very serious and direct, focused on the task at hand in this case, his mission to retrieve Dandy. While his methods are rash yet decisive, shown when ordering soldiers and later, mercenaries to capture Dandy in public locations where civilians are present. He is also noted have a measure of caution when Bea mentioned Mamitas, a Deathgerian in disguise is on the same planet with Dandy. More inclined to save his life than to obey a directive, he promptly withdraws the 7th Gogol Grand Fleet.

Despite his large and brutish appearance, Dr. Gel is a brilliant scientist, as mentioned by Admiral Perry. He can in fact, be so immersed in his study, he disregards everything happening around him. 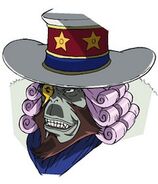 Dr. Gel as a child with his mother.
Community content is available under CC-BY-SA unless otherwise noted.
Advertisement