Johnny (ジョニー Jonī) is the commander of the Jaicro Empire and is introduced in Season 2, Episode 7.

Johnny is a handsome young man with pink hair, red eyes, and pointy ears. When he is in his commander role, he wears a dark blue cape that sparkles like the stars in space. 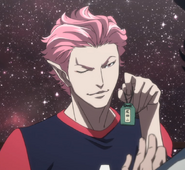 Johnny showing off blessing from a temple.