Prince (プリンスPurinsu) was introduced in A Race in Space Is Dangerous, Baby. where he appeared in the same BooBies joint Dandy and his crew were visiting, and got the full attention of the female servers.

Prince is a glamorous bishounen racer. He has long aqua hair which fades to a darker blue as it travels down. He is dressed in a white racing suit with a red strip from shoulder to ankle, complete with red fingerless gloves. He has a perpetual aura of sparkles, that intensify when he does.

Prince is as dashing on the outside in reverse to his personality inside. He never lost a race, and never intended to, ever. When Dandy showed up, claiming to snatch Prince's position, he snidely remarks the state of Dandy's mecha pod while his team, Z and Squeak, picked on the rest. His opinion about Dandy changed drastically when Dandy somehow beat him when his mecha pod was jettisoned by an explosion from Meow's outrageous fuel and Squeak's bomb. He fell head over heels for Dandy as no one had ever beaten him before. 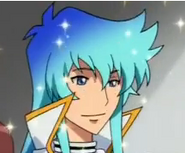 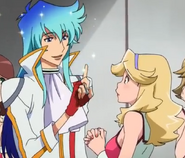 Prince in his racing ship.