QT is a robot vacuum cleaner on the Aloha Oe. Dandy was looking for a capable robot in the shop but ended up with QT.

He states he is a high-powered machine though this is obviously a lie as he is very outdated. One example of this is that he has to recharge when using too much energy and has to look at the alien dictionary for information on new species.

QT is a small, round, mainly yellow robot. He rolls around on two black wheels and has a blue face, with small black eyes. QT also has holes on either side of his body, where a retractable arm comes out, which has a hole in the middle of the palm for vacuuming. QT's body is gender neutral yet his voice and name are deceptively feminine. However, in the episode, "The War of the Undies and Vests, Baby," Meow implies that QT is considered male by saying "He ain't coming back" as QT begins flying the Aloha Oe away from an exploding planet.

QT is very serious and has a lot of pride. The robot is somewhat of a maternal figure to Dandy and Meow because he cooks, cleans, and is by far the most responsible member of the crew. QT is also very competent and tries to make sense of every situation while his comrades tend to be oblivious to most things. An example to this is when he tries to fix the Aloha Oe while Dandy and Meow goof off with Mamitas. He's also displayed how much he values his friendship with his crewmates on a few occasions. An example was when he stopped a zombified nurse from biting Dandy and being very concerned about Meow when he was sick.

QT is Dandy's robot, and his friend. They fly throughout the galaxy looking for new aliens to capture on their adventures. Dandy likes to tease QT sometimes about how outdated he is, but does seem to value him. He even hid behind him in the the episode, "Occasionally Even The Deceiver is Deceived, Baby".

QT thinks the same of Meow as Dandy and that's that they're both lazy morons. On the other hand the two seem to get along. 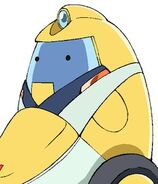