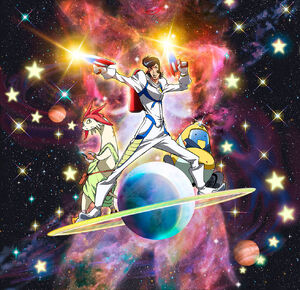 "A flare for the dramatic, a love for the ladies, and a sweet head of hair. That's the Dandy way!"
— Toonami promo.

Space Dandy (スペース☆ダンディ Supēsu Dandi) is a sci-fi comedy series by Shinichirō Watanabe, the creator of Cowboy Bebop and Samurai Champloo. The show features a character named Dandy and a crew aboard a spaceship named Aloha Oe and is currently finished airing its first season, with a second season airing in July 20, 2014 on the Dub[1]. A manga adaptation is currently running in Young Gangan magazine since December 20, 2013.

The story revolves around Dandy, a human alien-hunter. His job is to seek out new aliens never seen before, and receives a reward whenever he finds a new species. Dandy's mission is to find those new species faster than anyone else as he travels the galaxy and he travels with the bucket-of-bolts robot QT and the dimwit alien Meow he picked up. Along the way, Dandy comes into contact with new planets and their inhabitants. 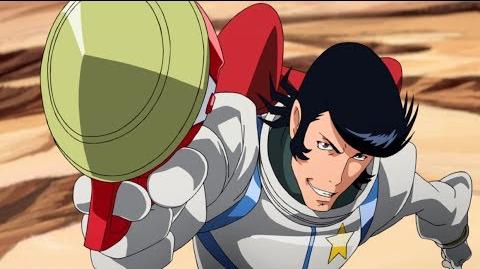 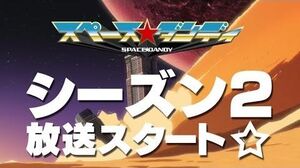 The anime has been licensed by FUNimation Entertainment in North America, Madman Entertainment in Australia and by Anime Limited in the United Kingdom. The series premiered in the United States before Japan on January 4, 2014 at 11:30pm on Adult Swim. The series began airing in Japan on Tokyo MX at 11:00pm on January 5, 2014, followed by TV OsakaTV Aichi, BS Fuji and AT-X. The series is also simulcasted in South East Asia at the same time as Japan on Animax Asia.

The manga adaptation began serialization in Square Enix's Young Gangan magazine on December 20, 2013. The first tankōbon volume was released on March 25, 2014. Yen Press licensed the series for release in North America, with the first volume released on June 28, 2016, and the second volume released on September 27, 2016.

The app released on Android on January 24th, 2014 & IOS on February 6th, 2014 in Japan. It was announced that it would renewed to " Super Space ☆ Galaga " in July of that year, and distribution started on August 6th, 2014. Fighters and parts were added in large quantities. The service was then discontinued on December 11th, 2014 and re-released as Space Galaga International edition for the release overseas. It was then discontinued again in 2016, the last updated version being 1.0.1