The Zombie Stiltonian is a zombiefied Stiltonian that Dandy and his crew captured under the impression that it was an unregistered alien.

The alien accidentally bit Meow after he put his hand in its cage. This subsequently caused Meow to turn into a zombie himself, which eventually lead to the entire universe becoming infected.

After finding out that zombiefication is incurable, the infected crew of the Aloha Oe fell into a cycle of despair and eating raw meat until they sought the advice of the Stiltonian, who had lived as a zombie longer than them. The Stiltonian advised them to avoid eating meat (suggesting yogurt as an alternative) and said they might enjoy being zombies if they changed how they thought about it. After this, he was released on an unknown planet.

Later in the episode, a zombie hunter is hired by Dandy's life insurance company to kill him for good. When Dandy goes into a movie theater, the hunter tries to follow him inside, only to be bitten and infected by the Stiltonian hiding inside the ticket booth. 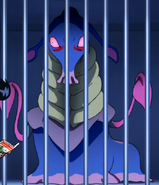 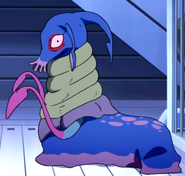